The Native people of the Amador-Livermore Valley have lived here for thousands of years, since long before Europeans even set foot on California soil. Living in a place with plentiful, carefully managed resources, well-placed between the Coast and the Central Valley, the tribes of the area in and around what we now call Pleasanton had developed a comfortable and sustainable lifestyle and took part in an active trade network with their neighbors.
These tribes belonged to the language group called Costanoan or Ohlone, whose speakers extended throughout most of the Bay Area and down to Monterey. Seven of these tribes, speaking primarily a language called Chochenyo, shared the Amador-Livermore Valley by the 1770s: Causen, Pelnen, Seunen, Ssaoan, Ssouyen, Taunan, and Yulien. Numbering a few hundred people, each tribe occupied a territory about ten miles across in villages of about 60-90 residents, for a total Valley population of roughly 2000-2500. 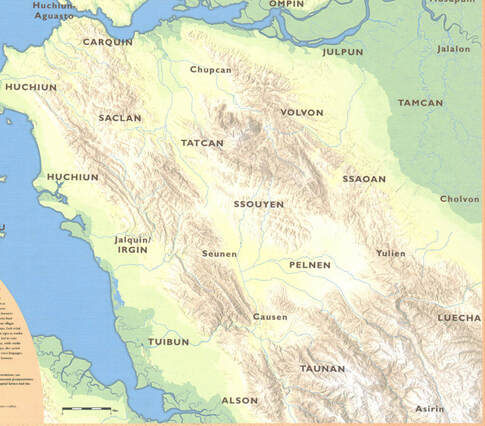 A Network of Tribes

Local tribes defined themselves by family relationships and by a shared connection to their home territory. Group solidarity was reinforced by communal activities such as seasonal harvests and ritual dances, which brought the tribe’s villages together. Tribal leaders included chiefs (called capitans by the Spanish) who seem to have directed relations with outsiders and mediated internal disputes, as well as other men and women who organized communal rituals or played other key roles in their communities.
Relations with neighboring tribes involved trade, intermarriage, and, when boundaries were broken, occasionally fighting. Valley tribes traded for obsidian from the Napa Valley, abalone and olivella shells from the Pacific and Bay coasts, and other workable materials and finished goods.
The social ethic of Native communities emphasized generosity, reciprocity, and mutual respect—both towards people and towards the natural world that they lived in. Even where there were differences in wealth and status, this ethic ensured that everyone had adequate access to food, shelter, and the other resources they needed to live as a member of their community.

Looking After the Land

Plant and animal resources were plentiful in the Valley, and although they did not plant crops or raise livestock, its people still played an active role in sustaining this plenty. The size of a tribe’s territory reflected the amount of land they could take care of. In the grasslands, they used seasonal burning to prevent overgrowth and encourage new growth that benefited both people and the animals they hunted. In gathering plants for food and other uses, they made a point of leaving something behind to grow back again. Gestures of appreciation for the resources they used recognized the spiritual aspect of their relationship with the rest of nature.