ABOUT THE ARTIST
An award-winning artist, instructor, and judge, Ms Magovern teaches ongoing classes and workshops throughout Northern California. Published cover and editorial illustrations include Smithsonian, Newsweek, the Wall Street Journal, Sports Illustrated, and Oxford University Press. In addition to her career as a free-lance commercial illustrator, she was also Senior illustrator for the iconic Banana Republic catalog. Peggy received the CPSA DC210 First Place award for "Explorations in Colored Pencils" and CPSA Award for Distinction "Explore This! 13", as well as Best of Show and Merit Awards from Bay Area galleries. Her fine art has been purchased across the US and in Britain, and is in permanent collection at the Beat Museum, San Francisco and Mendocino Art Center, Mendocino.

ABOUT THE ARTIST
A self-taught artist, Mitragotri works in both realistic and impressionistic styles to render landscapes, flowers and birds. Her painting "Rose" received an Honorable Mention in this year's Imagination Expressed show, and her work has appeared at several venues in the Tri-Valley, including the Firehouse Arts Center and the Lindsay Dirkx Brown Gallery of San Ramon. 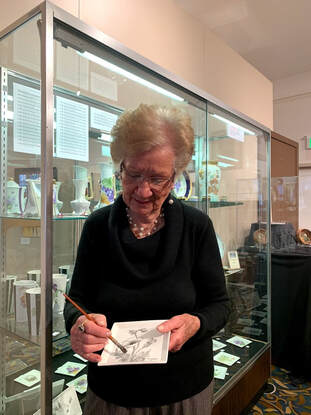 ABOUT THE ARTIST
Livermore artist Eugenia Zobel has worked in overglaze porcelain decoration for over three decades. Ms Zobel joined the Mount Diablo chapter of the World Organization of China Painters in 1989 and has remained active in the field even as the number of artists working in porcelain has declined. Her work has appeared at countless art shows in the Tri-Valley, and for the last twelve years she has been one of Imagination Expressed's most popular artists.
.